This week it’s all been about The Essex Girls (formerly known as Beyond the Beehive). I’ve been editing the book for its new publishers, adding a couple of extra scenes, re-reading it all, reminding myself about Linda and Sandra’s exploits in 1965.

In the process I was working on the chapter Good Morning Little Schoolgirl. In the Sixties, at my school we had to wear a uniform. The colour was navy blue. The rules were very strict. A beret (that I always folded in half and clipped as far back on my head as possible) had to be worn at all times on the way to and from school, as did a navy blue raincoat or duffle coat. If the weather was warm we would go home in a navy blue blazer with the school’s crest on the breast pocket, or simply the navy jumper, navy skirt and pale blue shirt and tie that we had worn all day at school.  There was a summer dress of a strange shape and flowery material, but no-one who was cool wore that.  And it all cost money. My mum knitted my V necked sweater which was seen as rather risque. As the mini-skirt became popular rules were made that skirts could be worn no more than three inches above the knee. 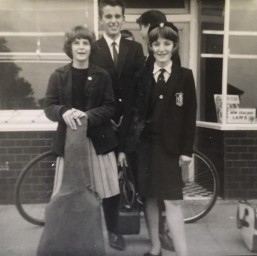 Backcombed, beehive hairdos were frowned on, so neat mod hair worked well, and my class mate Corinne and I tried to perfect the Cathy McGowan Cleopatra hairstyle. Corinne was more successful than me.

I would walk home from school along the Main Road till I reached the parade of shops at the bottom of Patching Hall Lane, where I would meet my best friend Chris whose school, the Blessed John Payne, as it then was, was just up the road. In the picture she is holding a guitar which she did not own or play. And then we would walk home together, planning what we would wear when we went out in the evening to the Orpheus coffee bar.

And here is the song that inspired the chapter.