Yesterday I was having lunch with Val Wilmer and the conversation turned to the Four Tops. Val had photographed them at a concert they were doing. We recalled their greatest hits, and the fabulous voice of lead singer, Levi Stubbs.

Today I’m tidying up a chapter in The Girl in the Green Mac that takes place in the Orpheus, the cellar coffee bar in the centre of Chelmsford where all the mods gathered. There was a great jukebox in the Orpheus that had all the cool hits, the obscure records you wouldn’t hear on Top of the Pops. Another of its great features was that it was attached to the wall next to a mirror by the stairs, a very handy spot for checking out who was coming in, what they were wearing and who they were with. Then it was the most natural thing in the world to turn and ask if anyone had two threepences for a sixpence, or change for a shilling, to put in the slot, or to just chat about the group that was coming to play at the Corn Exchange on Saturday. You could even pose a question about the Vespa or Lambretta’s progress since the last flat tyre or flat battery. Any subject is interesting if it has a good soundtrack.

In the chapter, Carol (the girl in the green mac) is at the counter, waiting to order two coffees for herself and her friend Angie, who is sitting in their favourite seat, a dark booth at the back of the room.  As she stands there, waiting for a group of young out-of-town mods to make up their minds between Coke and lemon or a glass of milk, with a hiss and a crackle, the Four Tops come on the juke-box. The song fills her with yearning and longing for someone to feel that intensely about her.

I thought I’d get in the groove while I was writing and I clicked on this track on YouTube, ‘Without the One You Love (Life’s Not Worthwhile). It came out in 1964, after their big hit, ‘Baby, I Need Your Loving’, and was another example of the rich velvety voice of Levi Stubbs. It wasn’t such a big hit, perhaps because the title was too long, or, it has been suggested, because it was over-produced. Who knows? Perhaps because the first line was almost a repetition of the title of the earlier hit and people were worried they were buying the same thing again. But if you keep on listening it becomes a great song in its own right. And to my 15 year old ears it was perfect.

A good weekend. The sun has been shining, so having breakfast in the kitchen reading the paper is already a joy. But there was a very interesting article in the colour supplement this week, by Grace Dent, the new Guardian restaurant critic. She was writing about processed food, the comfort and the deliciousness of food that comes out of a packet. She’s a bit younger than me, but it still reminded me of the treats made by Vesta or Birds Eye, that would appear at tea-time for a special occasion. You can read the article here.

And then, this weekend the writing for the next book (working title The Girl in the Green Mac) has been going well. I’m just writing a scene where our heroine is sitting on the garden wall, gazing at the flowers, when along comes bad boy/hero Cliff . He watches her sitting there and he wants to say something sweet and soft so as not to interrupt her reverie. I wanted to use the words of a song that would be short hand for what he was feeling, that they would both understand. Dream Lover by Bobby Darin has the wrong vibe – he knows where she is. What a Day for a Daydream by the Lovin’ Spoonful is just too late – 1966. And then I remembered Dream Baby by Roy Orbison. She can make his dreams come true. Yes, it’s a rocking number. But hey, Carol likes to dance, so why not use it?

In this version, much of rock royalty appears.

I’ve been working on The Girl in the Green Mac, the next 60s Chelmsford book.  The year is 1966, the Orpheus has changed its name to the R&B and the new owners are putting a stop to the four-hour cup of coffee.  Another boutique opens near the Shire Hall, run by a man with an unreal Italian name, and mini-skirts creep into the High Street. And the World Cup promises success for England and particularly for Chelmsford because of local boy Geoff Hurst.

When I’m writing it doesn’t really matter where I am, but what is important is to be able to listen to a song or a piece of music that captures the mood of what I’m writing about. This week I’ve been working on a chapter about the boutique owner, Gene Battini, who likes the cool music of Mel Torme. So I’ve been listening to ‘Comin’ Home’ which came out in 1962 but sounds good, even today. 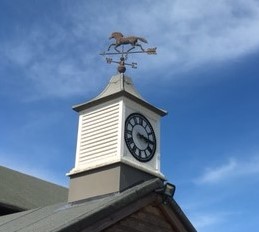 Galleywood Heritage Centre – formerly the Galleywood Race Course – was the venue for a great heritage day on Saturday 3 June. Lots of different groups guided visitors to ways of finding out about local history or their own family history, in a room that had once been the base of the Grandstand. It was a really hot sunny day, with much coming and going and sharing information and drinking tea and eating rather delicious cakes.  In a separate room, decorated with a host of interesting pictures of Chelmsford in the Sixties, and with the Kinks and Roy Orbison and the Stones crooning in the background, I was talking about My Generation.

What was very nice for me was hearing the experiences of those in the audience. In the first session there were no (ex)rockers, but in the second session there was a mix of (ex) mods and rockers – I had to be careful what I said. The discussion ranged far and wide from the pop groups that went to Southend to the £10 Poms who went to Australia, from Martin Ford (fashion emporium) where I bought my pin-striped fan pleated skirt, to the trendy straight shift dresses that made it easy to run up a new outfit for yourself. We talked about National Service and pubs and cafes. And I read a chapter from the new book (working title The Girl in the Green Mac) which went down well. So it was a great day all round.

One session ran from 11.30 to 12.30 and the second ran from 1.30 to 2.30. In between, with scarcely enough time for me to eat a cheese sandwich, Andy Stephens, a local reporter, asked me a few questions.  And here are the answers.

Next Saturday (3 June) will be a great day.   In the Galleywood Heritage Centre there will be a whole host of exhibitors showing different aspects of Chelmsford’s History, recent history and further back. I can’t really believe people consider the Sixties history – we are all still so young! but there will be The Essex Society for Family History, the Chelmer Canal Trust, the Essex Police Museum, the Western Front Association, and lots of others too. It’s free and there’s a cafe.

At 11.30 and at 1.30 I’ll be talking about my books ‘Beyond the Beehive’ (set in 1965 Chelmsford and coming out in a lovely new edition in the New Year) and reading from my new book set in 1966 – working title ‘The Girl in the Green Mac.’ Come and join in. What were you doing on 30th July 1966 when the World Cup match was being played?  What was your favourite record? Were you a Stones supporter or a Beatles fan?  Do you still have your Sacks and Brendlor Suede coat?

The Heritage Centre is off Margaretting Road, Galleywood Common, Chelmsford CM2 8TR It would be great to see you there.

And to get you into the mood here’s another chance to see the BBC documentary, first broadcast last year, about East Anglia in 1966.  See you on Saturday!