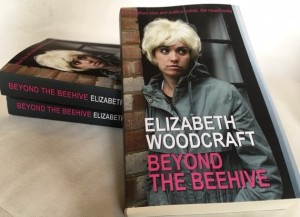 It’s been a very busy week for Team Beehive.

It started with an interview with Jo Good on BBC Radio London.  It almost didn’t happen – the BBC building in Portland Place, just off Oxford Street in London, is a huge and sprawling place.  And sometimes people giving you directions forget which is left and right (don’t we all?).  I went into the main building and asked directions and following those directions, I turned left. They were setting up baricades for a TV One Show event.  One hopeful fan was hanging over the railing, but otherwise the place was full of people in puffa jackets with clipboards and people in hoodies rolling heavy black and silver equipment around.  I turned left again but that was the wrong building.  I hadn’t crossed enough roads.  Roads! Eventually someone gave me the right directions – he pointed – and in I went through the glass doors and up in the lift to the studio.

Jo Good was wonderfully friendly and began the interview by playing House of the Rising Sun by the Animals.  When you hear it played on good loud equipment you really understand why it has stood the test of time.  It’s over 50 years old for goodness’ sake. We talked about Beyond the Beehive, about life in the Sixties, saving up for weeks and weeks for a coat or a bag that you wanted, the importance of colour and style.  She asked me whether I thought the battles on the beaches at Bank Holiday time really had taken place.  Of course – I wasn’t there, my mum would never have let me go, even if I’d asked her.  But I think they did.  Maybe not as full on and terrifying as it seems in the film Quadrophenia but something went on.  And not just Brighton of course, Margate, Clacton, Great Yarmouth… I cut this letter out of the paper at about that time when there was talk of raising the age at which you could ride a scooter or a motorbike. 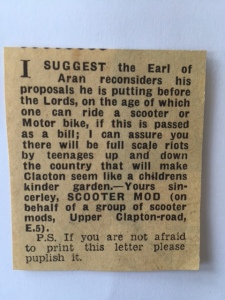 You can listen to the interview here.** It starts an hour and 10 minutes in, and runs for about twenty minutes.  The interview finished with Pinball Wizard by the Who.  Jo Good said listening to it always made her feel very happy.  And I can see what she means.

**For those who listen to the interview and the piece that Jo Good read out and think – Panorama, on a Saturday? I don’t think so! Rest assured, I know Panorama was never on a Saturday. The piece she read was about a week night.  In fact, later in the programme – keep listening for a wonderful story about someone who had a scooter, and a helmet and a beehive, and the solution she found for keeping her hair-do in tact – someone picked up on that piece and Jo Good realised it was in fact, a school night.

Then it was up to Stroud Green Library for a meeting about a 60s Saturday which is happening on 12 November. There’ll be 60s music, memorabilia, Beyond the Beehive and you can take a selfie wearing a beehive wig! 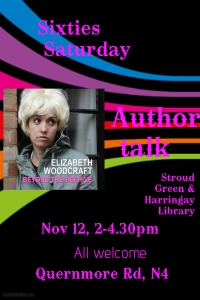 And then on to Chelmsford for an interview with Tony Fisher on BBC Radio Essex. No trouble locating my destination. I know where the BBC Radio Essex building is – it’s on New London Road, a ten minute walk from the Orpheus!  Listen to the interview here. It starts 2 hours and 10 minutes in and lasts about 20 minutes.

The interview began with Be My Baby by the Ronettes.  We talked about life in Chelmsford in the 60s and also about Bob Dylan’s Nobel Prize for Literature – because in 1966 I saw Bob Dylan at the Albert Hall.  I’ve written about it here  It was the time when Dylan was changing from acoustic to electric and people in the audience called out ‘Get back to the good stuff.’  Dylan who was playing the organ at the time, rocked back and forth and said, ‘Good stuff, bad stuff, it’s all the same.’ So I told this story on the radio.  A friend who was listening said it was so realistic she thought she was listening to a news item.  See what you think.

Tony Fisher was really into Beyond the Beehive which was great.  Sometimes when you write a book you’re so immersed in it you don’t see the characters as they appear to the rest of the world.  He immediately understood bad boy Danny and he played Shotgun Wedding by Roy C, a record that used to float through the Orpheus if people announced they were getting married.  It was a really good afternoon, and not just because of the cake (it was Tony Fisher’s birthday).